What Could Have Been if They Had Not Destroyed It | From the series Fore-Castle Hill | Cooperation Ľudmila Rampáková | 2010 – 2021 | Oil, pencil, pen, collage, paper, canvas | Private collection 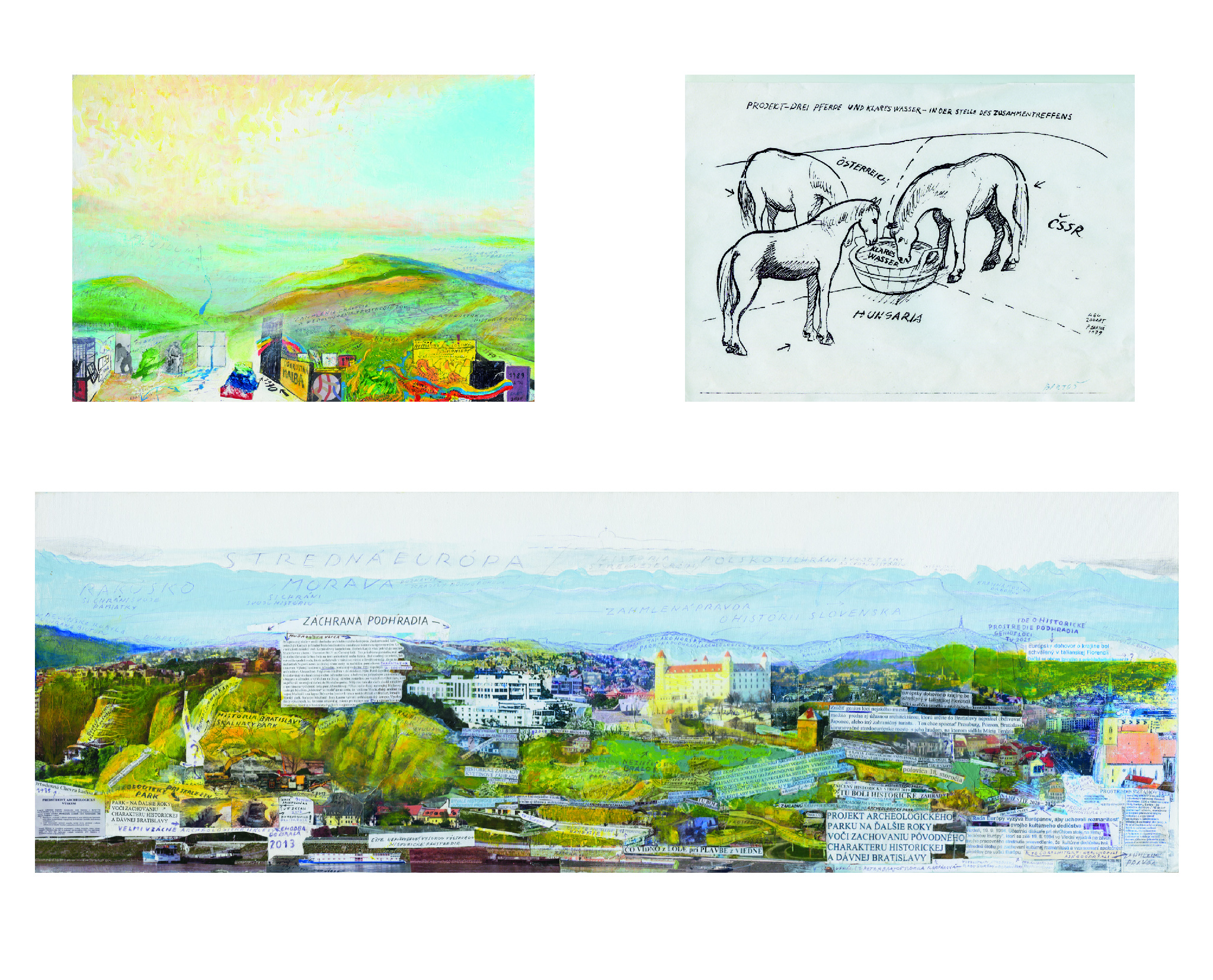 From as early as the 1960s Peter Bartoš has maintained one level of his work in which he projects his human and artistic retrospective along with his personal experiences and opinions on landscapes marked by historical and political events. Naturally, he places himself in the territory of Central Europe, whose history as well as its territorial integrity he perceives as an indivisible unit. If he comments on borders, it always has an identitarian meaning, as, for instance, in his drawing and xerox-art Three Horses Drink Clean Water (from 1979). In the artwork Aside from Co-operations. Partial Resume of Oeuvre. (1967-2020), he meticulously projected the milestones of his art program on a topographic map of Bratislava and its environ beyond the current state borders. The River Danube dissipates into the distance following the path that he set towards Danuvia 68, he finds a new starting point after the occupation in August 1968 in the stepping out of nothingness and darkness (Prvodotyk | Prime-touch, 1968) in the fluidity of lines and paths leading to the future. The river divides the composition of landscape between the near Austrian hills and the castle hill of Bratislava, in the tension of complementary tones of yellow and blue with counterpoint in red. The section of the painting depicting the period, the beginning of which is marked by the reference to the artist’s painting To Freedom! (1967) until 1989, is designed as an interweaving of several scenes. From the center of the citation of the painting Visible and Invisible Tracks Behind the Screen (1970), lines A, B, C run into the landscape where the Bratislava Mountain Park, Zoo, Koliba and Kamzík are and draw traces of Bartoš’s land-art plans of alterations and projects of mending the landscape. By recording his conceptual thinking from the 1960s onwards, he bears witness to the “Foggy Truth about Slovakia”. The painting What Could Have Been if They Had Not Destroyed It belongs to the series The Drama of the Bratislava Fore-Castle Hill, on which Bartoš worked in collaboration with Ľudmila Rampáková for more than 11 years. The ancient district of the city became a real epicenter of his work several years ago. He examines it, studies it, discusses it with experts, observes and conceptualizes its gradual devastation in the name of new urban development plans. The artist needs to express himself publicly, boldly and originally about the current physical condition of the city of Bratislava, and the mentality and education of Slovak citizens, their relationship to the protection of cultural heritage and environment of our “”home country”. (P.B.)